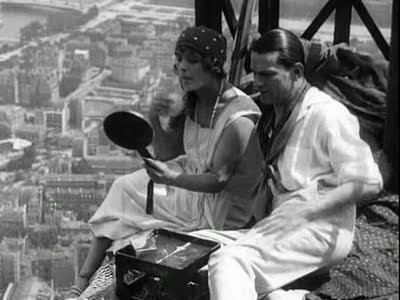 PARIS QUI DORT is the debut film by the French film-maker René Clair (1898-1981) and is one of the first science-fiction films. During the 1930s, Clair gained international fame as a director of avant-garde and artistically innovative films.

This comedy concerns a certain Albert, who guards the Eiffel Tower. One day he discovers that the residents of Paris have fallen into a profound sleep. Just a few, who have arrived by aeroplane, have escaped the mysterious ray of a mad inventor. These few have retreated to the Eiffel Tower and Albert joins them in an exploration of Paris. The exhausted inventor has used the magic ray to freeze the residents of Paris in the strangest and most compromising situations, and some who have escaped the ray have turned to plundering.

In 2005, the French composer Yan Maresz composed an intriguing score to this film.