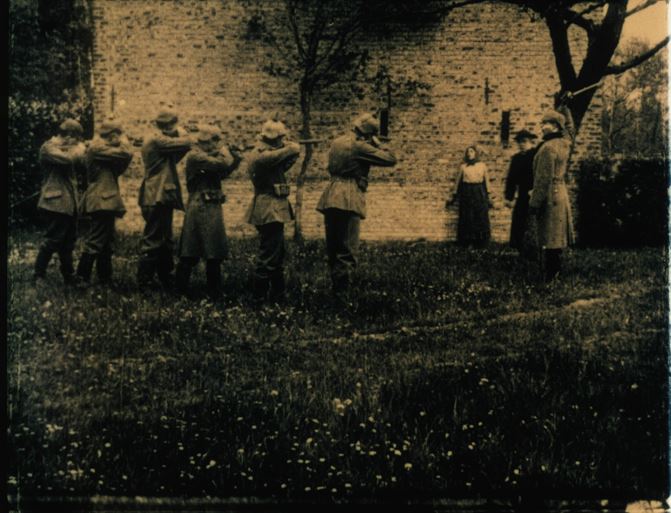 In 1919 LA BELGIQUE MARTYRE was the first post war film production to be made in Belgium and the first patriotic war film in a series of no less than eleven productions. All of them were produced between 1919 and 1924 and bearing pathetic titles like Ame belge, Coeurs belges, La revanche belge or Jeune Belgique. Although most of those films were results of individual initiatives, they are the embryonic results of an emerging cinematographic industry in Belgium. These films characterized by uncompromised patriotism, fierce idolatry of King and country, sacrifice and strong anti-German sentiments were quite popular in the first post war years in Belgium.

LA BELGIQUE MARTYRE is the only film produced before the Versailles treaty, recuperating the image of poor little Belgium, created by allied propaganda during the war. The film stresses ‘how Belgium suffered for the victory of justice’ and how the country’s now awaiting ‘a place in the vanguard of nations’. Every possible war crime committed by the Germans comes across: the German disapproval for Belgian neutrality; the invasion; executions of innocent civilians; the so-called francs-tireurs; pillaging and looting of villages; deportations; the battle and sacrifice in the muddy trenches of the Yser River; death on the battlefield and the mourning of the Belgian people. Indeed, emphasis lies on the suffering of the country and its inhabitants. In 1918-1919 Belgium had high expectations of the Versailles negotiations, held in sister country France.

Belgian newsreel pioneer, dynamic businessman and promoter of the Ligue du Cinéma Moral, Hippolyte De Kempeneer first moves from documentaries into the realm of fiction in 1919. He sets up a small studio which he christens the Compagnie Belge des Films Cinématographiques. With his habitual flair, he turns out a long series of jingoistic films, interspersed with adaptations of popular novels and melodramas featuring well-known actors from the Brussels stage.

His first production is The Martyrdom of Belgium (Belgique Martyre), announced as “a patriotic drama in five parts, directed by and starring Charles Tutelier”. Scriptwriter and stage actor Tutelier would later direct another two films – Little Belgians and Flup the Hunter, both now lost – before abandoning filmmaking for his theatre career.

Here he plays Robert, a young Flemish farmer’s son who is entrusted by his father with the family homestead when the latter is mobilized. The bloodthirsty Germans murder his mother, deport his grandfather and set fire to their village. Young Robert succeeds in joining with his father in the trenches and he kills the German who ordered the shooting of his mother. With the signing of the Armistice, he marries his fiancée and rebuilds the ruined farm. The film ends with a title card to the glory of martyred Belgium («You, rise again from your ashes, you little people with grand history, you have progressed to the forefront of the civilized world»), a crowd of extras form the word «Pax» in human letters, a device clearly interpreted from the title sequence to Abel Gance’s J’accuse.