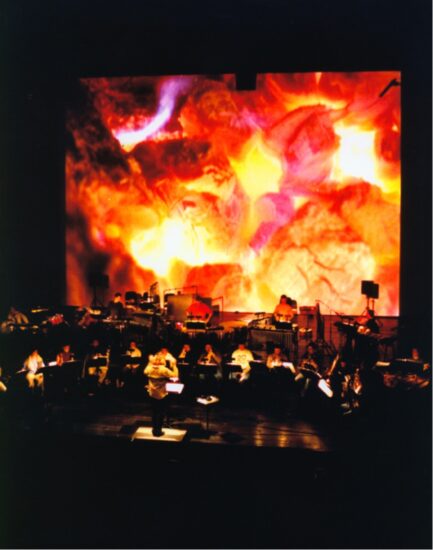 the Tax Shelter measure of the Belgian Federal Government

An overwhelming audiovisual spectacle about how the avant-garde of the 20th century predicted the ecological issues of the 21st century.

The film and music of BALLET MECHANIQUE came about separately in the 1920s. Here we show them as one. HERMESensemble presents the music by the American ‘bad boy of music’ George Antheil in confrontation with the film by Fernand Léger and Man Ray.

The music and images depict industrial violence and derailed exploitation of fossil fuels in a surrealist setting.

DESERTS (1950) by Edgar Varèse is one of the key works that defined the music history of the second half of the 20th century. The masterpiece refers not only to the physical deserts of sand, sea, snow, immeasurable space.

It also refers to an inner emptiness, to the loneliness of modern man.

In 1994, the American video artist Bill Viola stunningly portrayed this icon of the musical avant-garde with a film, shown live with the music.