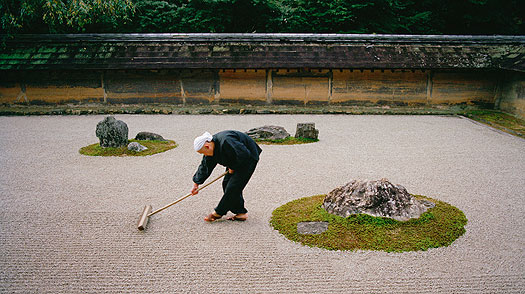 In 1983 Cage began a “composition in progress” that he called Ryoanji, after the famous Zen rock garden in Kyoto, Japan. The garden comprises 15 stones placed in a landscape of raked white sand.

In the summer of 1983 Cage embarked on a series of drawings entitled “Where R=Ryoanji”, in which he takes the 15 stones as his point of departure.

At about the same time he asked the oboist James Ostryniec to compose a piece for him, which resulted in the first part of Ryoanji.

Between 1983 and 1985 Cage added four more parts to it, for voice, flute, double bass and trombone. The percussion accompaniment and tapes were added later on.