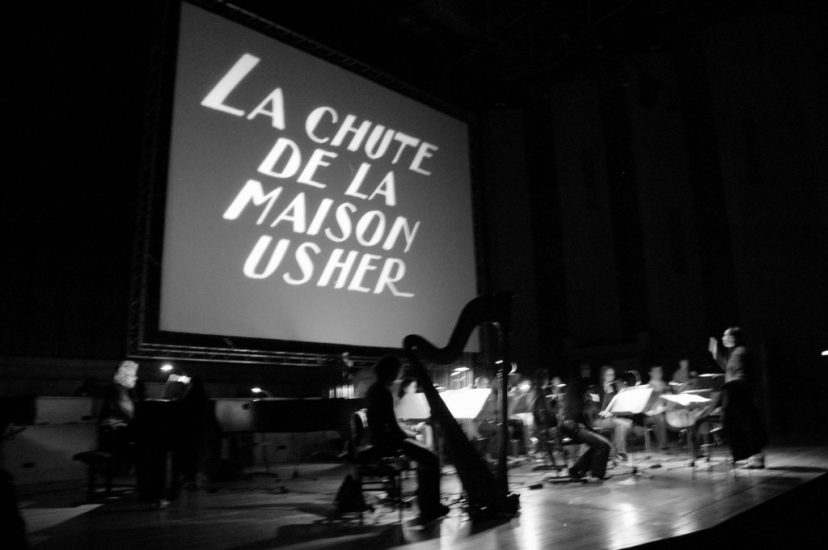 The poetic horror film ‘La Chute de la Maison Usher’ (1928) is Jean Epstein’s one great masterpiece. On this film he was assisted by no less a personality than Luis Buñuel. It is a loose adaptation of Edgar Allan Poe’s novella ‘The Fall of the House of Usher’, with additional elements from other stories by Poe (mainly ‘The Oval Portrait’).

It is the fantastic tale of the lord of the manor, Roderick Usher, and his dying wife Madeleine. The intensity of the film is due to a whole range of technical devices and very clever lighting. Epstein evokes a lugubrious, disturbing and breathtaking atmosphere. Film historians refer to it as the climax of expressionism in the silent film.

For the ‘Centenary of Film’ in 1995 the Italian composer Ivan Fedele (b. 1953) wrote a new soundtrack for this cult film.

This music is both a retrospective ode to the avant-garde of the twenties, and a radical new score. It was written for soprano and large ensemble. This project is perfectly suited to HERMESensemble. After all, the passion in this music derives from both the historical avant-garde and the combination of image and contemporary music.

The young Italian Marco Angius will be conducting the ensemble specially for this occasion. He specialises in the work of contemporary Italian composers and has built up an impressive record of achievements in his own country and far beyond.