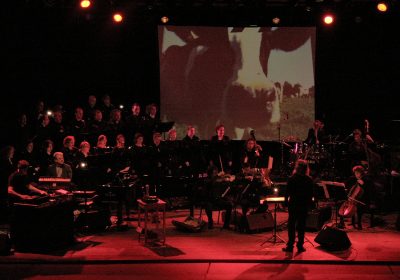 Without being personally aware of it, the musical experiments of the early Pink Floyd linked up seamlessly with that of the classic avant-garde. The enthusiasm of the group for exploring electronic equipment was shared with Karel Goeyvaerts and Karlheinz Stockhausen, the tape collages are similar to the musique concrète of Pierre Henry and Pierre Schaeffer, the ideas of John Cage about accident and silence are to be heard and the minimalist structures are related to those of Terry Riley and La Monte Young.

Even so rock ’n roll and classical music were two isolated bastions sealed off from one another. Now – decades later – there are no obstacles to a merger and that brings us to the starting point of the Pink Floyd project.

Various avant-garde movements from the sixties are brought in touch, mutual links established and the achievements of each attuned to the other.

Pink Floyd is interpreted by a specially selected group of instrumentalists. The classical instrumentation, including strings, brass and a complete choir demands a different arrangement. On the other hand this project is not a classical version of the music of a rock group and is most certainly not symphonic rock. Although classical instruments are supplemented by some of the typical Pink Floyd instruments (Hammond, drums and the obligatory gong and timpani), others are deliberately avoided.