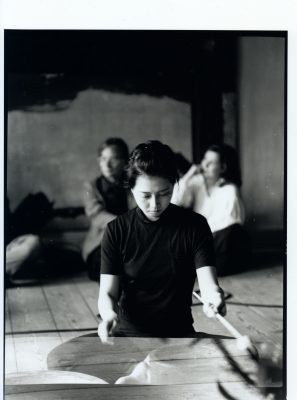 Masahiro Miwa was born in Tokyo in 1958, and formed a rock band in highschool in 1974. In 1978 he moved to Germany to attend the National Academy of Art in Berlin, where he studied composition under Isang Yun. Since 1985 he has studied under Güther Becker at the Robert Schumann National Academy in Düseldorf. He has been teaching computer- and electronic music at the Academy since 1988. In 1986 Miwa began to teach himself computer programming, and has since focused on creating computer music.

Mamoru Fujieda, a leading figure of Japan’s postminimalism movement, Mamoru Fujieda was born in 1955 and first studied composition at the Tokyo College of Music, then received his Ph.D. in music from University of California, San Diego in 1988. Fujieda is internationally recognized as one of music’s outstanding younger composers.

Yuji Takahashi, born in 1938 in Tokyo, studied composition with Shibata Minao and Ogura Roh. Between 1963-1966 he stays in Europe, and works with Iannis Xenakis. He founded the band ‘Suigyu Gakudan’ (Water buffalo band) in 1978, which brings international Asian protest songs.